ORION Update... Last week, the Orion Multi-Purpose Crew Vehicle was placed inside the Reverberant Acoustics Laboratory (RAL) at Lockheed Martin's Waterton Facility near Denver, Colorado. There, Orion will be attached to the Launch Abort System (shown above) and then undergo a series of tests to simulate the noise level the vehicle will encounter during liftoff...which can surpass 160 decibels. The first flight of Orion into space is currently scheduled for 2013. The launch vehicle that it will fly on for the test is undetermined.

SHUTTLE FIRSTS... Two members known as Alpha Control and dsky posted these interesting bits of info on the NASASpaceFlight message board regarding the shuttle and how it stands out above all other current human spaceflight programs. This list includes aspects that we should celebrate for happening and not happening in regards to the Space Transportation System:

- The world's first spacecraft that returns from orbit with wings and wheels, and lands on a runway.
- First spacecraft in history to be launched into space more than one time (Columbia).
- First shirt-sleeve, 14-lbs. PSI (per square inch) sea-level cabin atmosphere in space.
- First general-purpose spacecraft.
- First recurring use of a fleet of production space vehicles.
- First large-capacity windows in a spacecraft, and the most total windows on a spacecraft (11).

SHUTTLE FIRSTS THAT WE CELEBRATE FOR NOT HAPPENING:

SHUTTLE TRIUMPHS TO CELEBRATE IN THE YEARS AHEAD:

- The astounding versatility of the shuttle - satellite launcher, orbiting science laboratory, planetary probe dispatcher, telescope repairman, and space station assembly truck.
- Opening up spaceflight to a broader range of people beyond just test pilots.
- The amazing dedication and focus of the NASA employees and contractor personnel who maintained and operated the fleet with superb professionalism, to the very last day.
Posted by Richard at 2:21 PM 0 comments

IMAGES OF THE DAY... After yesterday’s landing of Atlantis, thousands of workers at NASA’s Kennedy Space Center in Florida gathered to take part in an employee appreciation event to welcome home the orbiter and reflect on the end of the Space Shuttle Program. While this was a time to celebrate the safe and successful completion of the STS-135 mission, it was also a moment for the employees to contemplate about the unknown road that lies ahead for many of those who worked on the shuttle program. One can only hope that those who will be laid off in the coming days and weeks will be able to seek jobs elsewhere that will be as rewarding as working on a fleet of technological marvels that were the workhorses of America’s human spaceflight program for the past 30 years.

NASA / Frankie Martin
Posted by Richard at 12:19 AM 0 comments 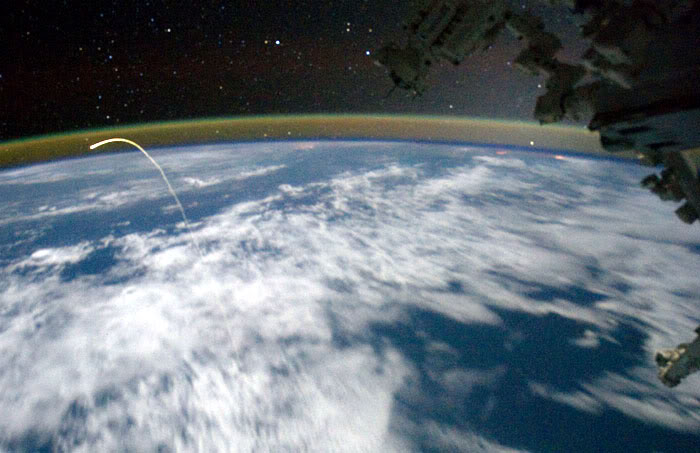 WELCOME HOME, ATLANTIS! And just like that...a 30-year-old human spaceflight program comes to an end. At 2:56 AM, Pacific Daylight Time today, NASA’s last remaining orbiter soared through the night sky and touched down at Kennedy Space Center (KSC) in Florida. Left behind as the shuttle’s legacy is a venerable observatory, the Hubble Space Telescope, that has been in orbit gazing at the cosmos since 1990 and an orbiting outpost the size of a football field, the International Space Station (ISS), flying 220 miles above the Earth. Atlantis will find her final resting home at the KSC Visitor Complex sometime next year...while U.S. astronauts will find their next ride to the ISS onboard Russian Soyuz vehicles around that same time. NASA’s shuttle replacement, the Orion Multi-Purpose Crew Vehicle, isn’t set to become operational till 2016. Let’s hope that when it does fly, Orion will pave the way for a new and historic era for NASA...with hopeful legacies for the capsule including a trip to an asteroid in 2025, as President Obama has promised, and a long-awaited journey to the Red Planet years later.

It remains to be seen what the future will hold now that Discovery, Endeavour and Atlantis have concluded their careers in triumphant fashion. I hope this future will be as noteworthy (if not obviously more) as what has transpired for our human spaceflight program over the past three decades. Carry on. 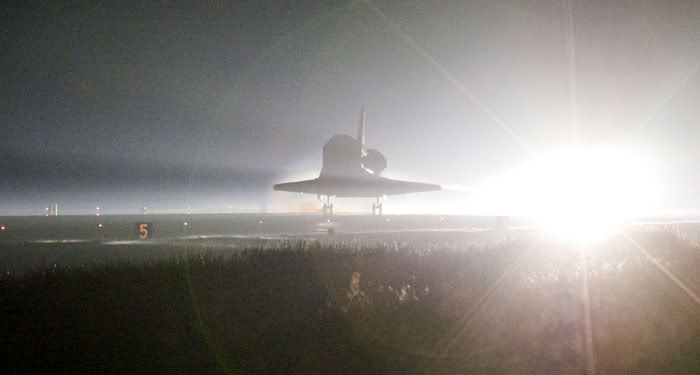 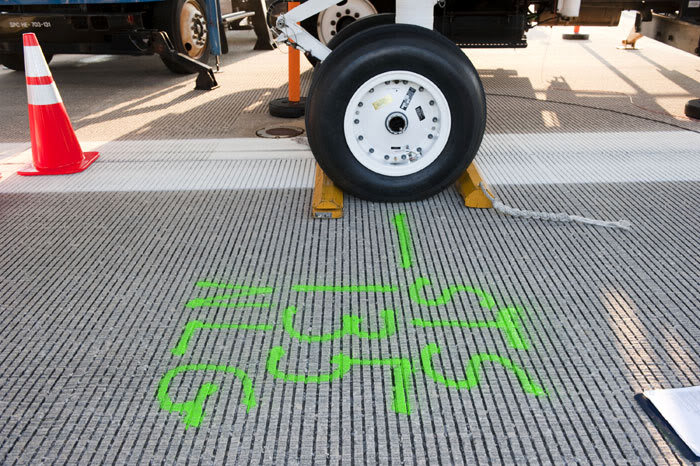 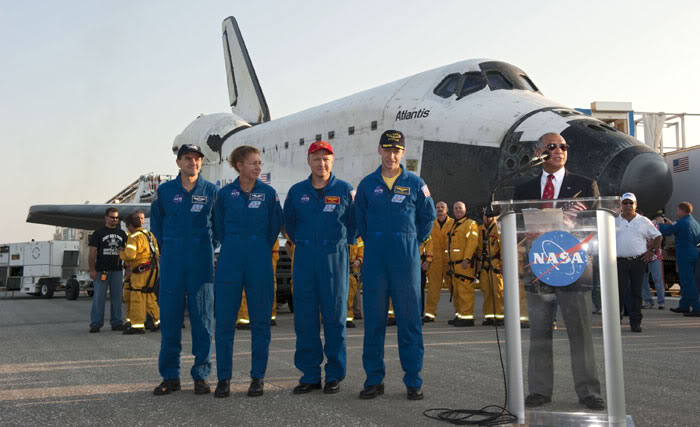 LESS THAN ONE DAY BEFORE LANDING... (And exactly 42 years after Apollo 11 touched down on the surface of the Moon.) At 2:56 AM, Pacific Daylight Time tomorrow, the orbiter Atlantis is scheduled to return to Kennedy Space Center in Florida for the last time...officially bringing an end to NASA's space shuttle program. To commemorate the final flight day of STS-135, here are some photos taken around the time Atlantis undocked from the International Space Station yesterday:

VIDEO OF THE DAY... Check out this amazing footage of the International Space Station and orbiter Atlantis that was taken using a ground telescope in broad daylight! To read more about this awesome video, click here.

IMAGE OF THE DAY... Check out this amazing shot of the shuttle Atlantis, her Orbiter Boom Sensor System (or OBSS...which is the white pole in the middle of the photo) and an International Space Station solar array with the Southern Lights (or Aurora Australis) glowing in the background. This breathtaking image was taken yesterday. For more pics from Flight Day 7 of Atlantis' final mission, click here.

PHOTOS OF THE DAY... Earlier today, space shuttle Discovery was transferred from her Orbiter Processing Facility (OPF-2) to the Vehicle Assembly Building (VAB) at Kennedy Space Center in Florida. Inside the VAB, Discovery will be in temporary storage as Atlantis undergoes post-flight processing at OPF-2 once she completes her final mission about a week from now. Atlantis will be in OPF-2 for a month before Discovery returns to the hangar (or another OPF) and continues her decommissioning process. Discovery's delivery to her final resting home at the Udvar-Hazy Center in Virginia, however, won’t be till mid-to-late 2012.

A HISTORIC MOMENT... Shown below is a photo taken during today's spacewalk, which will be the final one to ever occur during a shuttle flight. Expect this image to grace textbooks and other media in the near future.

ATLANTIS IN ORBIT... Shown in this entry are photos taken before Atlantis docked with the International Space Station (ISS) for the final time yesterday. A one-day mission extension was granted by NASA officials this morning, which means that Atlantis will be docked to the ISS till July 19, with a return to Kennedy Space Center in Florida now taking place on July 21 (instead of July 20th...the 42nd anniversary of Apollo 11 landing on the Moon). For more images from Sunday's rendezvous, click here.

MORE IMAGES FROM THE LAUNCH...

THE END IS HERE... At 8:29 AM, Pacific Daylight Time today, the space shuttle Atlantis lifted off from Kennedy Space Center (KSC) in Florida to embark on a 12-day mission to the International Space Station (ISS). The launch was originally scheduled for 8:26 AM, but the countdown clock stopped at 31 seconds before liftoff because KSC officials wanted to make sure that the gaseous oxygen vent arm that connects from the launch tower to the top of the shuttle’s external fuel tank fully retracted. Atlantis will dock to the ISS this Sunday, and transfer more than a year’s worth of logistical supplies to the outpost over the next week before returning to KSC on July 20...which marks the 42nd anniversary of Apollo 11 landing on the Moon.

Below are photos showing Atlantis undergoing construction in Southern California around 20 years ago. They are courtesy of Space.com.

Boeing
Posted by Richard at 8:45 AM 0 comments

READY TO LAUNCH... Assuming the weather cooperates this weekend, that is. NASA currently has the launch forecast at only 30% "Go" tomorrow morning, so let's not hold our breaths.

IMAGE OF THE DAY... This photo of the Orion Multi-Purpose Crew Vehicle was taken on July 1. The spacecraft was about to undergo testing inside the Reverberant Acoustics Laboratory at Lockheed Martin's Waterton Facility near Denver, Colorado. After this examination is complete, the vehicle will next be shipped to NASA’s Langley Research Center in Virginia to undergo a series of drop tests in 2012.

Source: SPACE.com... All about our solar system, outer space and exploration
Posted by Richard at 11:59 AM 0 comments

READY TO FLY ON THE FOURTH OF JULY... Earlier today, the four-member crew of flight STS-135 safely touched down via T-38 astronaut training aircraft at the Kennedy Space Center (KSC) in Florida...in preparation for space shuttle Atlantis’ final launch to the International Space Station (ISS) this Friday. Official countdown is set to begin tomorrow at 10 AM, Pacific Daylight Time (PDT), with liftoff occurring at 8:26 AM, PDT on July 8. If all goes well, Atlantis will safely return to KSC around 4:06 AM, PDT on July 20...completing a flawless 12-day mission to the ISS, and concluding more than 30-years of manned spaceflight involving reusable launch vehicles to low-Earth orbit.